You may have seen in the news recently that drone users may have to start registering their aircrafts with the Federal Government. This includes the remote controlled, relatively small crafts for recreational use. The FAA (Federal Aviation Administration) said this about the issue: “Flying unmanned aircraft in violation of the Federal Aviation Regulations is illegal and can be dangerous,” FAA Administrator Michael Huerta said earlier this month. “We have the safest airspace in the world, and everyone who uses it must understand and observe our comprehensive set of rules and regulations.” The FAA proposed a 1.9 million dollar fine to an aerial photography firm that took pictures above New York and Chicago. With all the hoopla surrounding this, we decided to take a look at some of the weirdest, craziest, insert whatever adjective you want, arrests having to do with drones in recent history.

A judge has dismissed all charges against a Kentucky man who was cited for criminal mischief and wanton endangerment after he shot down a drone over his property. Witnesses said that the drone was seen below the tree

line, which Judge Rebecca Ward ruled was in violation of William Merideth’s privacy.

I’m an avid fan of both quadcopters and startup pitch TV show “Shark Tank,” so when the two came together last week, I was eager to see the outcome.

I never expected a feeding a frenzy. All five “sharks” took a stake in xCraft, a company with one drone in production, the X PlusOne, and another now on Kickstarter, the PhoneDrone Ethos.

If you’re curious about the latter, it’s exactly what it sounds like: a drone manned by your phone. It doesn’t use your phone as a controller, mind you, but rather sends your actual phone skyward, using its guts for aerial glory.

See, quadcopters require some sophisticated technology: GPS, gyroscopes, cameras and so on. This is all stuff that just so happens to be built into your phone. The PhoneDrone provides the mechanicals — the four propellers and a shell — while your…

Pilot: “We just wanted him to replace the drone, and now he’s selling T-shirts.”

The Kentucky man who was cited for criminal mischief and wanton endangerment after having shot down a drone over his property has now been cleared of all charges.

On Monday, a judge presiding over a Bullitt County District Court hearing dismissed all charges against William Merideth without prejudice, which means the Bullitt County prosecutor could refile the charges before a grand jury. John Wooldridge, the County Attorney, did not immediately respond to Ars’ request for comment.

According to local television station WDRB, Judge Rebecca Ward found that because three witnesses said that they saw the drone “below the tree line,” the drone flight was a violation of privacy. ” 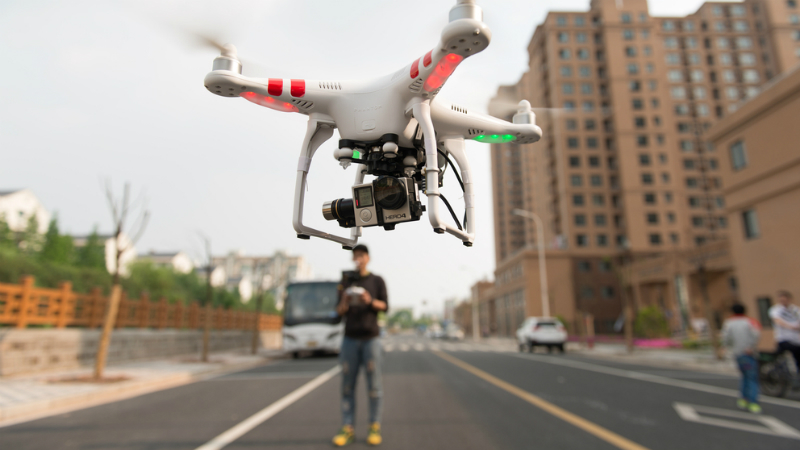 The world’s largest retailer is hoping to work with the world’s biggest consumer drone manufacturer.

On Monday, Walmart said it filed paperwork with the Federal Aviation Administration to test outdoor drone delivery with devices made by China’s SZ DJI Technology Co. In documents first reported by Reuters, the retailer explained that it wants to research ”deliveries to customers at Walmart facilities, as well as to consumer homes” and that it had already experimented with unmanned aerial vehicles (UAVs) at its indoor facilities. There is a drone for everyone, including the one who stays at home all the time.REUTERS/MIKE SEGAR

Christmas is in two months, but it’s never too early to brainstorm gift ideas for your family. With the surging popularity of hobbyist drones—more than a million drones are expected to be sold this holiday seaso—perhaps you are considering one for your loved ones.

One caveat: Someone will likely have to register the drone or face fines and other unspecified punishments from the government, which is trying to hammer out the details as this is being written. But for consumers, registering should be painless and should not detract from the experience.

Shopping for drones can be pretty intimidating. Here are five drones to consider, broken down by level of experience so that anyone—including your grandma—can grab a remote and take to the skies.

A Royal Air Force drone has been found in the surf of a Scottish beach.

Lying on the shoreline at Baleshare on North Uist the Mirach 100/5 target drone was found by a member of the public out for a walk.

They alerted the coastguard in Benbecula who in turn called in staff from the MoD rocket range at South Uist.

It’s not the first time such hardware has been found in the area, positioned as it is close to where the UK Armed Forces conduct much of their testing.

A drone user who filmed progress of an under-construction national highway was warned by a government agency after posting the footage online.

He had permission from the Civil Aviation Authority and air traffic control to conduct the flight, but did not think he needed consent from the Crown-owned NZ Transport Agency (NZTA), which owned the land.

Several hours after his video appeared on Stuff, Perrim said he was questioned by NZTA about how he shot the footage.